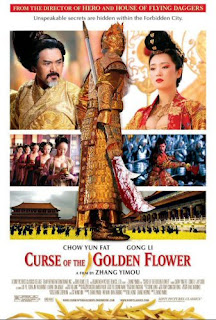 So this was the movie with which I started out 2007, the year of 200 movies. I'm not sure now why I gave this movie two and a half stars. I think that at that point I wasn't totally comfortable with scoring movies. I had never done a starring system before, and I probably didn't think about it as thoroughly as I do now. I would just say, "oh, that was, mm, a two star movie." Now I've determined that my four star system is structured like this:
0 stars - absolutely horrible movie
* -pretty poor, but not unwatchable
** -an average film.
*** -really good, but not great
**** -destined to be one of my all time favorites, in my top ten for the year, i was able to watch this movie the whole way through without wanting to check my (nonexistant) watch.
So, I'm not sure I would have given this movie two and a half stars if I were to watch it for the first time today. It would garner maybe one and half or two stars.
I'm not saying I didn't enjoy this movie. I did, it was very interesting visually, lots of lush colors and, towards the end, lots of blood. The story was pleasantly soapy and, again, towards the end it got very bloody. A review I read compared it to Shakespeare, and there are Shakespearean elements to be sure. It's just kind of a tired story. But maybe I'm just missing the point, because I guess all these Chinese movies are supposed to be government propaganda or something. I don't know, I think that's what Steve said. Anyway, this is a good enough movie if you are super into Chinese movies. There's not a whole lot of that flying around stuff, if that's what you're looking for, there's some, but the film is mostly set in the palace.