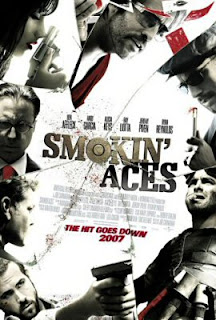 Gosh this movie really stunk. I'm not sure why I wanted to see this one, or how it is that I actually ended up seeing it...I think Steve wanted to see it as well, because he loves magic. I think I wanted to see this because there was a point in my life where I was a bit of a Jeremy Piven fan, around the same time that I was a big John Cusack fan and was watching Comedy Central all the time and they were constantly showing PCU. Which, in less words, would be when I was in high school. Jeremy Piven now...I don't know. I just hear about him being really gross and sleazy, and he is on Entourage which is a show that I pretty much hate. That is all beyond the point though, because I did see this movie and it was one big clusterfuck of crappiness. Oh, I just remembered that Ben Affleck is in this movie! For like, maybe 5 minutes all together! And that he is probably the best part! Well, him or Jason Bateman. I'm undecided about Mr. Bateman in this movie, I'm not sure if his part was genius and hilarious or just...gross like the rest of the movie. To conclude, this movie was more than tolerable at times, it had it's moments where it was actually entertaining, and some of the large assemblage of talent was surprisingly enjoyable (I was unexpectedly charmed by Alicia Keyes and Common). BUT it was too long, some of the characters were totally unpalatable, and the plot was just to deeply steeped in ridiculousness.